GoSpaceWatch Online Lectures currently take place on the first and third Wenesday of the month at 7:30 pm UK Time unless otherwise stated. All lectures cost £3.00 per participant and are open to all.

Ben Evans (Spaceflight Author): “An Experiemental Flying Machine“. Based on his forthcoming book of the same name, Ben talks about this historical and remarkably complicated flying machine of the American Space Programme.

John is a Chartered Engineer who worked in the space industry for over 30 years, including 10 years as Project Manager for the European Consortium responsible for the Mid-InfraRed Instrument (MIRI), one of the 4 science instruments on the James Webb Space Telescope.

Martin Lunn: “A Ramble Through the Solar System” 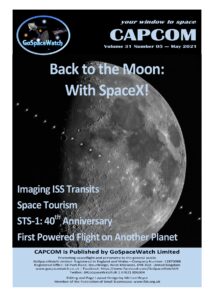 From Cave to Hubble by Jonathan Powell

The Search for Life on Mars

Member of the Federation of Small Businesses: Visit the FSB Website

Any cookies that may not be particularly necessary for the website to function and is used specifically to collect user personal data via analytics, ads, other embedded contents are termed as non-necessary cookies. It is mandatory to procure user consent prior to running these cookies on your website.