Promoting Space Exploration and Astronomy through online lecture meetings and the bi-monthly CAPCOM Magazine. We have regular online meetings via Zoom. Meetings feature an expert speaker with a spaceflight or astronomical talk. Our regularly updated Speaker Programme can be found here: Speaker Programme. We also have a free weekly Newsletter “GoSpaceWatch Weekly”. Sign up for this Here.

GoSpaceWatch Summer Talks: “The Universe, Half an Hour at a Time” by Dr Steve Barrett (University of Liverpool)

Have you ever wondered how the universe began, how it will end, and everything in between? Maybe you do not have the time to read the many fantastic astronomy books on the subject, or you think that they might be too technical for you to understand.

This summer, GoSpaceWatch, with Dr Steve Barrett from the University of Liverpool, presents a series of online talks designed to encompass some of the popular questions about the universe. Four talks, each taking just half an hour, over four weeks, and aimed to give the enquiring mind a better understanding of our current knowledge of our universe. These talks will take place on Tuesdays: 10th, 17th, 24th and 31st August.

This series of talks is free after registration. Click on this link for more details and to Register: https://universehhaat.eventbrite.co.uk

The James Webb Space Telescope (JWST – or just ‘Webb’ nowadays) is optimised for making infrared observations in order to study the origin and evolution of galaxies, stars and planetary systems and is designed to look further back in space and time than the Hubble Space Telescope. It is a massive international project, decades in the making involving NASA, the European Space Agency and the Canadian Space Agency.

Tickets available via the form below through Eventbrite. Note: If you do not wish to use Eventbrite, we will accept BACS Bank Transfer or PayPal. To pay by Bank transfer, please email me at michael@gospacewatch.co.uk. To pay by PayPal, click the button below.

Hubble is Back in Business…

These images, from a program led by Julianne Dalcanton of the University of Washington in Seattle, demonstrate Hubble’s return to full science operations. [Left] ARP-MADORE2115-273 is a rarely observed example of a pair of interacting galaxies in the southern hemisphere. [Right] ARP-MADORE0002-503 is a large spiral galaxy with unusual, extended spiral arms. While most disk galaxies have an even number of spiral arms, this one has three.
Credits: Science: NASA, ESA, STScI, Julianne Dalcanton (UW) Image processing: Alyssa Pagan (STScI) 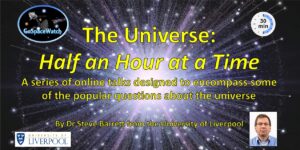 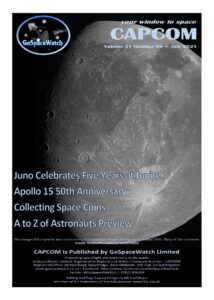 From Cave to Hubble by Jonathan Powell

The Search for Life on Mars

Member of the Federation of Small Businesses: Visit the FSB Website

This website uses cookies to improve your experience while you navigate through the website. Out of these cookies, the cookies that are categorized as necessary are stored on your browser as they are essential for the working of basic functionalities of the website. We also use third-party cookies that help us analyze and understand how you use this website. These cookies will be stored in your browser only with your consent. You also have the option to opt-out of these cookies. But opting out of some of these cookies may have an effect on your browsing experience.
Necessary Always Enabled
Necessary cookies are absolutely essential for the website to function properly. This category only includes cookies that ensures basic functionalities and security features of the website. These cookies do not store any personal information.
Non-necessary
Any cookies that may not be particularly necessary for the website to function and is used specifically to collect user personal data via analytics, ads, other embedded contents are termed as non-necessary cookies. It is mandatory to procure user consent prior to running these cookies on your website.
SAVE & ACCEPT